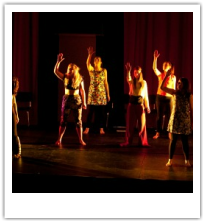 Kate is a performer, theatre maker and practice-led researcher. Kate initially joined the Performing Arts team at Northumbria University as a Graduate Tutor (2005-2008) before re-joining in September 2011 as a Senior Lecturer. Between 2009 and 2011, Kate worked as Associate Senior Lecturer at Leeds Metropolitan University as well as a Visiting Lecturer at Northumbria.  In 2011 Kate founded GIFT: Gateshead International Festival of Theatre, an international festival for new theatre makers.  Following the success of GIFT 2011 as a pilot event, Kate is now growing GIFT as an annual event for Gateshead and the North East.  GIFTed, a new higher education strand for the festival will also be launched in 2012. www.giftfestival.co.uk

Kate completed her practice-led PhD entitled ‘Collaboration in Performance Practice: trust, longevity and challenging proximity’ at Northumbria University in 2010. Much of Kate’s PhD research was carried out through her role as performer and co-artistic director of mouth to mouth | international performance collective; a globally dispersed group of performing artists who utilise Skype technology as a tool for performance.  Kate also has a solo performance practice and has performed her one woman show Hand me down extensively, and is currently working on a new solo performance work based on the life of Gertrude Bell with the working title: The GB Project. Between 2004 and 2005 Kate worked as a performer with the Northern Stage Ensemble as part of the InterAct Scheme. Kate also worked as Movement Coach on the award winning production Motherland by writer/director Steve Gilroy.


Research InterestsKate’s research is largely based in practice led modes of enquiry in the field of contemporary performance practice.  Kate is interested specifically in notions of collaboration and ensemble practice, and the potential for international theatre festivals as contexts for collaboration.  In recent years, Kate has created new performance works and workshops for theatre festivals in Romania, Croatia, Spain, Ireland and the UK.

Affiliations and MembershipsKate is on the editorial team of Training Grounds, a section in the Routledge journal Theatre, Dance and Performance Training and is currently working towards a special issue on ‘Theatre and Sport’, to coincide with the 2012 London Olympic Games.
Since 2010 Kate has been on the Board of Directors of the award winning theatre company The Paper Birds
Kate is a resident artist at The Shed Creative Studios in Gateshead
Kate is a member of Equity