#1
The notion of doing a PhD was sparked with the idea of a comparison between what I had acquired from several years of learning and creating art in Iran and what I found interesting in contemporary Western art movements.

Beside my interest in visual arts, I have always been interested in deductive ways of thinking. Therefore, I have read about art philosophies from my BA up to now. However, I never studied any part of Western philosophy exhaustively before my PhD. What I knew about the philosophy was the Illumination Philosophy (a school of philosophy based on Persian notion of light and Platonic philosophy).

Reading the Structuralism and Post-structuralism philosophy and especially Deconstruction, right after I came to the United Kingdom, attracted me so much. The comparative nature of my thesis, became the comparison between my past knowledge and their method of thinking. When I returned to Iran in 2009, the government of the time had changed the executive policies, procedures, and priorities in many aspects including academia. At that time, Iran’s international relationship was not very shiny; the sanctions were imposed and there was a total cut off with the UK. As a result of the new atmosphere, there was little opportunity for me to get in my career life as an independent scholar. I began to teach as a casual lecturer in several universities. In my spare time, I followed my interest in Deconstruction and Post-structuralism and continued my research. During the past five years, I have been teaching what I learned to my students and supervised several dissertations in related areas.

I am an illustrator, and my works always have the characteristics and follow the restrictions of this form of art, such as size and medium, and of being figurative. The subjects of my artworks have been changing from the time I was doing my PhD. Architectural spaces gradually left my work, and more organic and natural objects are now of my interest. I am now more conscious about the concept of my artworks, not to produce the more original and clear meaning, but to produce a more playful ground for thinking and comprehension. 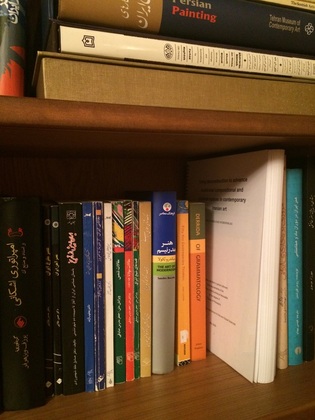